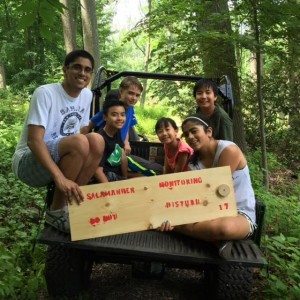 The Cora Hartshorn Arboretum provides many opportunities to observe biofacts, meet a naturalist, and learn to share your world with wildlife. Our educators offer a variety of programs specifically designed to meet the requirements of many Boy Scout and Girl Scout Badges. Most programs are typically 60-90 minutes long, and are $5/scout with a minimum program fee of $50.

Please contact us at 973-376-3587 or info@hartshornarboretum.org to schedule your visit!

As you work toward your Eagle Scout Award, please keep the trails and grounds of the Cora Hartshorn Arboretum in mind! Our experienced conservation educators are delighted to work with candidates who can show leadership among their peers and elders.  The Rank of Eagle is the highest honor a Boy Scout can receive, and the staff of the CHA has helped over 20 young men reach this honor.

Each of these Girl Scout awards marks a time in a girl’s life where she worked and led in a big group, small group, and individually.  The Gold Award is the highest honor a girl can achieve with the Girl Scouts, and is not often achieved.  You will work with our experienced conservation educators to build and educate the community, making a lasting impression on the world around you.

If you are a Boy Scout and need to volunteer your service hours to advance to the next rank, the CHA is here to offer you the chance to give back to the community. We constantly need help on our trails and grounds.  After you’ve completed your hours, you will receive a letter from CHA listing how many hours were completed, with contact information of the staff member who oversaw your work.

About The Lenni Lenape Shelter

The web content here and the interpretive education exhibit on our grounds is part of an Eagle Scout Service Project by Joshua Kirshenbaum,leading his peers and elders with the Scouts of Boy Scout Troop 17, St. Rose of Lima.

About our Lenape Interpretive Education Exhibit:

Prior to European colonization of the Americas, the Lenape lived and thrived in the Delaware River valley, including: New Jersey, eastern Pennsylvania, southeastern New York, northern Delaware, and a small section of southeastern Connecticut.  This area was known as “Lenapehoking”- Land of the Lenape.

The Lenape lived together in groups of 25-50 people, with occasional villages having 200-300 residents. The Lenape clans were traced matrinineally, or based around descent from a person’s mother. Sons were the ones who were expected to leave their clan to join a new one. There were three known clans of Lenape: Wolf, Turkey, and Turtle. Each village had a council that decided all public affairs that was led by a sachem (chief).  Each sachem was appointed and dismissed by the eldest woman in the community.

The Role of Men and Women in a Lenape Village: